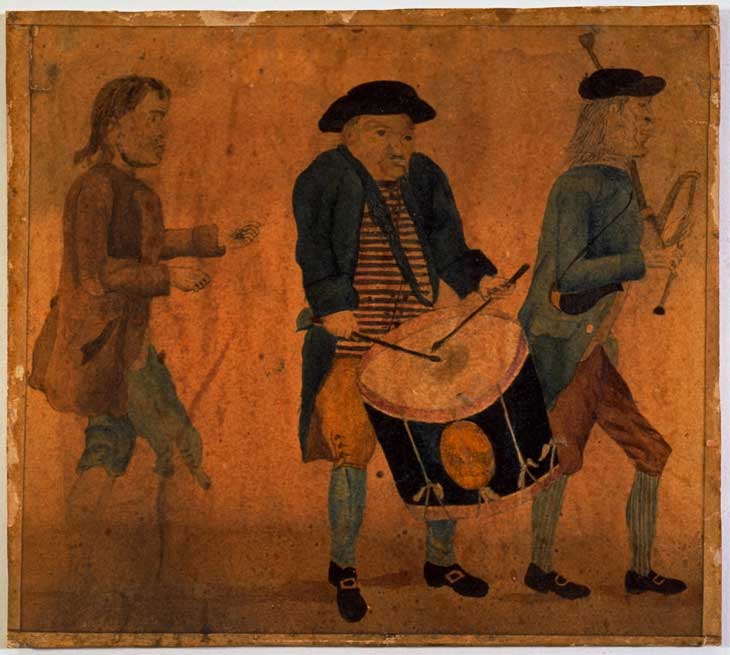 There’s a long history of piping and drumming in Haddington. At St Mary’s kirk, which was built in the 14th and 15th centuries, there’s a carving of a bagpiper on one of the buttresses, while the earliest record of a town piper in Haddington is contained in the town records of 1542. In 1572, the town treasurer was instructed to buy a new drum for the town drummer.

The present band, a successor to various bands over the years, had its earliest performance in fancy dress and under the guise of the Tyneside Tipplers, named after the Tyneside Tavern where the members met in those early days. In 1981, four of the Tipplers – Ramsay Borthwick, Alan Brotherston, Bill Bradford and David Leckie – decided to create a more formal outfit. The name chosen was Haddington Pipe Band, a uniform was selected, and the business of running a ‘proper’ pipe band began in earnest. 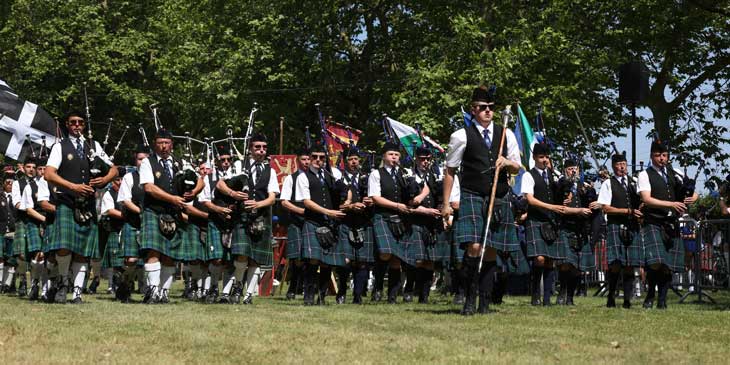 In 1989 the band visited Haddington’s twin town in France, Aubigny-sur-Nère, for the first time. Regular visits have taken place since then to play at the town’s Fete Franco-Ecossaises. We also played a lead role in the establishment of a pipe band in Aubigny and the links remain strong.

Our 2010 trip to Aubigny marked the 21st anniversary of our first visit. To mark the occasion, a special tune – Ça Marche – was commissioned from Bruce Thomson and presented to the town and to the Aubigny band. 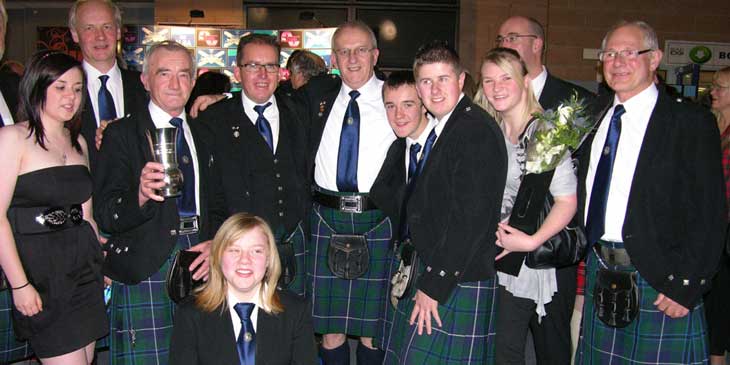 The year 2009 was something of an annus mirabilis for us.  The year began with our organising a competition to find a pipe ‘anthem’ for East Lothian. Entries came from all around the world and culminated in a live play-off in Haddington. In front of a large audience, one of Scotland’s finest piping composers, Bruce Thomson, won with his 6/8 tune, The Haddington Turnpike.

From this event, we went on to organise a series of massed band performances around the county to bring all the local bands together and to showcase our new anthem. The events resulted in our winning two awards, including a gold award, at the 2009 Scottish Event Awards.

Next came what is very probably our finest moment when we were selected as the Scottish Pipe Band of the Year in the Scots Trad Music Awards. This was a wonderful and very unexpected honour. Initially shortlisted for our community work, we went on to win the title through a public vote, beating some of the outstanding Grade 1 pipe bands in the country and collecting the award at a memorable and emotional night in Dumfries.

As the band has developed, it has built up a busy schedule at galas, festivals, weddings, charity events, dances, dinners and parades, and in recent years we have staged a number of concerts. We also perform regularly at the monthly Haddington Farmers’ Market.

For a number of years, we organised a traditional music festival, Trad on the Tyne, in Haddington, which attracted some of the top musicians in the dynamic Scottish trad music scene. Like our 2009 massed band events, Trad on the Tyne won a number of awards, including three at the Scottish Event Awards.

In 2011, the band launched its CD, The Haddington Turnpike and Other Great Pipe Tunes. We were honoured that the CD was produced by the superb Greentrax Recordings.

In 2013/14 another honour came our way when we successfully bid for a BBC Fellowship and for a year worked closely with one of Scotland’s finest young composers, Ailie Robertson. The experience was rewarding in many ways. It brought us not only the legacy of a series of fine tunes which Ailie wrote in her time with us but also a real appreciation of the composing process and a heightened level of musicality.

Today, the band is very much a community band. We are proud to play a prominent role in our local town and area, and we maintain close and excellent links with the pipe band at our local secondary school, Knox Academy. Led by an outstanding young pipe major, Fraser Wilkinson, guided by an energetic and committed board, and given outstanding support by the local community, Haddington Pipe Band is delighted to have established a reputation as a friendly, family-oriented organisation with members of all ages and from all backgrounds.

All are very welcome.

Visit our Timeline to find out more about the band’s story.